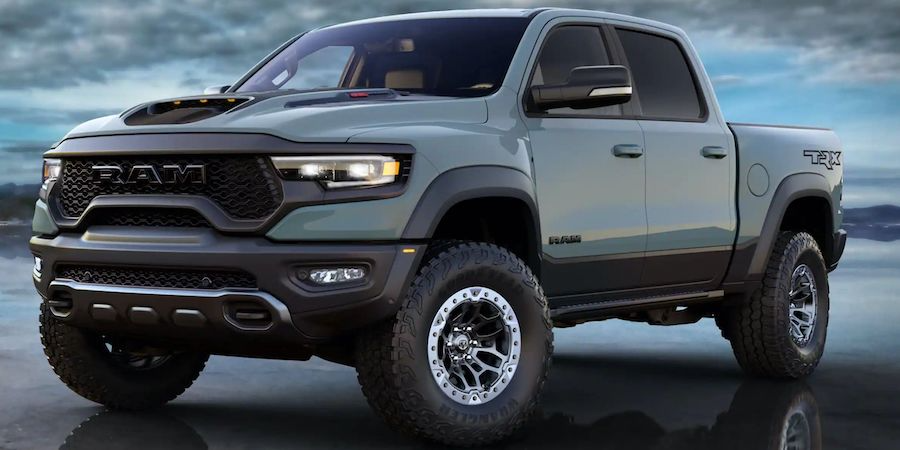 The birth of the Dodge Ram 1500 TRX comes from taking Dodge’s already successful Ram 1500 and beefing up its performance through mechanical upgrades, most notably, the addition of a massively powerful V8 engine. Dodge’s intention of producing a superior Ram 1500 comes through in several ways aside from its engine upgrade, the Ram 1500 TRX includes a greater suspension, wider body, and stronger frame. Initial sales for the vehicle began in the fourth quarter of 2020 as the Launch Edition was displayed at Barrett-Jackson Scottsdale on March 20.

Four years before its release, Dodge showed a small glimpse of the Dodge Ram 1500 TRX in the form of a concept car known as the Rebel TRX, a vehicle that would act as direct competition for juggernauts such as Ford’s F-150. This concept car focused on power and performance that would be powered by a Hellcat engine, a move that would become reality with the creation of the Ram 1500 TRX.

Dodge has entered into real competition with the creation of the Ram 1500 TRX, and this step forward for the automobile company comes with several other obligations to the market and its consumers. Having the Ram 1500 TRX serve as a serious option for current and future buyers means that this vehicle will have to meet the advances that companies such as Ford and General Motors commit to their flagship models. We can expect Dodge to produce new models for the Ram 1500 TRX that will provide customers with enhanced performance as well cosmetic upgrades.

The most vital component that separates the 1500 TRX is undoubtedly the immensely powerful supercharged 6.2-liter Hemi V8, or more commonly known as the Hellcat engine, which can provide the Ram 1500 TRX with 702 horsepower along with 650 ft-lb of torque, which is then sent to the road through an eight-speed automatic transmission. The TRX has seen impressive results during testing, a 0 to 60 miles per hour time of 3.7 seconds and the completion of the quarter-mile in 12.3 seconds at 110 mph, a level of performance that places this vehicle nearly at the top spot for the fastest stock pickup truck ever produced. The Ram 1500 TRX has a surprisingly high amount of handling on paved roads, even with its sizeable curb weight, but it should be known that the pickup truck was not designed to travel the concrete jungle, but rather it specializes in off-road travel.

The Ram 1500 TRX supports its upgraded suspension system that can support above 13 inches of travel with a strengthened steel frame. This model sports a rather large set of 35-inch all-terrain tires, which along with its 18-inch wheels, contribute to the pickup truck’s 11.8-inches ground clearance. The TRX also comes standard with plenty of underbody protection plates which ensure that the truck’s BILSTEIN shock absorbers, electric rear differential, and front brakes are kept safe from potential damage.

These mechanical upgrades were designed with the thought of beating Ram’s competition, and objectively, the TRX has beaten the F-150, at least according to tests performed by Car and Driver. The TRX was able to outperform the F-150 in most tests and categories, a testament to the work and engineering that was placed into the vehicle.

Ram has taken a path to change the perception of pickup trucks and their interiors by producing a side of luxury and style into their latest models, and fortunately, this step forward for Ram did not fail the 1500 TRX, which can only be ordered as a crew cab. The TRX comes standard with cloth upholstery that is reminiscent of Dodge’s 1500 Rebel, though buyers can opt-in for additional packages for a more premium feel. These packages are the TR1 and the TR2, which proffers the use of leather as a substitute for cloth and the addition of aesthetic accents that highlight the cabin’s features.

The common issue of subpar miles-per-gallon that plagues large vehicles does linger with the TRX as the EPA has given it a 10-mpg estimate in the city and a 14-mpg on the highway, a figure that might disappoint some consumers when compared to Ford’s Raptor.

The cost of this powerful TRX starts just above $72,000, a large amount of cash for a truck, though certainly a fair cost, as consumers are unlikely to find stock pickup trucks that feature over 700 horsepower. A counterpoint for the price however is the lack of features that are considered standard on most modern cars. An instance of this is heating for both seats and the steering wheel, both of which are behind the first tier of the TRX. Both upgrade versions of the TRX offer plenty of details that create a grand sense of luxury that is normally not associated with rugged pickup trucks. The second tier of the TRX cruise control comes equipped with a digital rear-view mirror, lane assist, and a heads-up display for a price that hovers close to $80,000.

For 2022, Ram has not changed the 1500 TRX but rather chosen to produce a new variant, the Ignition Edition. Production is limited to 875 copies for the US market and 100 copies for Canada, a very small number of units produced for a vehicle with large demand. The Ignition Edition TRX will be distinguishable from its normal counterpart by exclusive orange paint, unique side graphics, and black 18-inch wheels. For the interior, orange accents will run through the cabin along with distinctive stitching for an eye-grabbing look. Talking about costs for these limited TRX will land us on a figure of $93,280, a number much larger than the base TRX from the previous year, though these units come equipped with features that were not considered standard for normal TRXs.

The legacy of the 1500 TRX can easily be seen as the continuation of the line with new models, and that will come in the form of the 2023 Ram 1500 TRX, which is expected to hit markets in the second half of 2022. The new TRX will continue to put its focus on performance by using the Hellcat engine and use the advancements of the original TRX to improve the truck’s systems. The 2023 TRX will additionally improve on its 6.2-liter supercharged V8’s horsepower by increasing the total output to 720 horsepower. This model could also be the last TRX to use the Hellcat engine as automobile companies continue to make advancements in research of more powerful engines, at least according to Dodge CEO Tim Kuniskis.